Farming in the Uplands with Biodiversity in mind

It must be farmed

These areas must be actively farmed to maintain them in a high nature status. Abandonment can have a devastating impact on the variety of species in your land. The management and maintenance of these lands is critical for biodiversity.

Get an awareness of the species on your land

There is a lot of information out there of what is growing and living on your land. Get to know them and what suits them. This was the biggest eye opener for me, it gave me a new value on my land. What you are producing has so many different values.

Your farm advisor should be able to help you with any information you need. There is a lot of advice for management of the uplands available on line. There are good resources available from both The Pearl Mussel Project and the Hen Harrier Project, who are dealing with farmers with upland grazing providing excellent habitats.

Invasives species can cause a massive loss to Biodiversity. Well managed grazing can be the best way to control any invasives. Rhododendron has been the main species that I have being trying to control. Once again abandonment of these areas can lead to a take over from 1 species.

Consider Cattle in relation to Bracken and Molinia control

Where sheep are the most common grazers in our uplands, we have found that introducing cattle, during the summer, out on the Commonage has managed to keep the Molinia under control. They open the plant up and make it more accessible for sheep. Bracken is not a problem on our farm, but we have seen the cattle are a good option in areas where Bracken is an issue.

Communicate, visit, and learn from other farmers

We are not trying to reinvent the wheel. There are many farmers in your locality or in similar locations who are only happy to share their knowledge and happy to welcome you onto their farm. The development of networks in the uplands is very important in keeping these places lived in and farmed.

Both under grazing and overgrazing can have serious consequences for biodiversity on the uplands. We run 1 ewe to the Ha and find it works for our system and what we are trying to achieve. Some hills would not be fit for this stocking rate, others would suit a higher rate. Under grazing can affect some of the smaller birds like the meadow pippet. Overgrazing can open your peatlands too much, leaving no cover, and leave no room for life. It’s a fine balance and needs to be monitored over a long period and results noted.

Farmers here are the rare species

Farmers in the uplands are the species that needs to be looked after. There is a wealth of knowledge, experience and understanding in upland farmers, this should not be overlooked, it can be lost very easily. Decreasing rural populations in these areas is a very serious problem. These are generally areas of high nature value, but the management of these areas and life in these areas does not feel too valued. Developing of networks, friendships, communities, and learning are very important in the uplands. 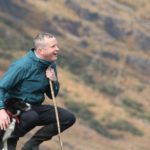 Colm Gavin is an 8th generation farmer, farming in the Bundorragha catchment in Mayo. He farms 90-100 Mayo blackface ewes. The sheep are out on the mountain year-round, grazing the multi-species natural vegetation and maintaining the land. Colm operates a very extensive hill farming operation and very few external inputs are required on the farm.  Colm is involved in the Pearl Mussel Project EIP. This project rewards participant farmers for the ecological quality of their land, which in turn contributes to the pristine water quality needed by the Freshwater Pearl Mussel. As part of his work in this project, Colm continues to remove invasive rhododendron from the mountain, as well as installing silt traps to capture excess sand/silt runoff from the land before it enters the river. He has also put in livestock bridges at various points along the riverfront to further protect the water quality. “Being part of the Pearl Mussel Project EIP puts value on land that we wouldn’t have considered highly valuable in the past. These areas have actually turned out to be the most important areas on the farm in terms of biodiversity.”  Passionate about the beautiful landscape and nature that makes up his farm, Colm sees himself as a caretaker of the land and hopes the pass it on to the next generation in better condition than which he found it; “as a hill farmer – all you’re doing is maintaining the land.”  More information on Colm’s farm here. Ambassador since 2021

Farming at Altitude with Nature

What does it take to farm the uplands in a way that both provides an income and restores nature? Nia O’Malley farms 150 acres in the Slieve Aughty Mountains in Co. Galway, in the west of Ireland.  She explains how her beef farming works to support – not diminish – the wild species who make the uplands their home. This is a 20-minute podcast from the Groundtips series.  To listen just click below, then like, share, review.

Using donkeys and ponies to manage rush and molinia

Farming in the uplands requires a good deal of management of rush and molinia grass. Effective management requires close grazing of these two plants in order to keep growth under control.  Topping and mowing can work very well in controlling strong rush, but I find it is the close grazing of the young rush after this that is most effective when it comes to managing rush growth.  Similarly with molinia grass, close grazing over the summer months can really help control this grass. However, come late August/early September, molinia grass starts to lose a lot of its nutritional value.

Here is the Slieve Aughties, it is not ideal to close graze rush or late season molinia grass with cows as they will be affected nutritionally, and production negatively impacted – beef/milk production, growth. This isn’t the case with donkeys. They have far lower nutritional requirements than cows, plus they have evolved to be able to extract what they need nutritionally from poorer quality shrubs and grasses, so actually do quite well grazing off young rush and late season molinia.

I find donkeys compliment farming in the uplands with cows really well, as can be used to follow through after cows have grazed an area to help ‘clean up’ the field. I tend to put the cows through first to graze off the best of the grass, and follow through with the ponies, and then lastly with the donkeys and they graze off any young rush, unwanted scrub or molina grass that has been left behind. I find this works really well and have managed to bring some very poorly marked fields (due to rush and Molinia) well up on marks, with some fields even getting upgraded to species rich. This was hugely rewarding! For me donkeys have played a huge role in turning my farm around, enhancing grassland value while also increasing biodiversity value.

Donkeys are classed at 0.8 LU, same as a cow, but are often overlooked as a farm animal. They may not be a commercial animal in terms of production eg beef or milk to sell, but for me they play an equally important role – in production of a different kind – biodiversity. They have improved my grassland, which in turn has improved my beef production. But in doing so have also improved my ‘biodiversity’ production with improved fields teeming with wildlife.

Tip on rush growth: rush appears to grow much slower during the winter months and I find topping rush as late  as possible in the autumn, followed by grazing off young growth with donkeys during the early winter months, really helps control rush. The rush seems to grow quite slowly during the winter and this gives the grasses a good chance to establish and get a head start over the rush come Spring. Just something I’ve observed on my farm on my never ending quest to get on top of rushes! 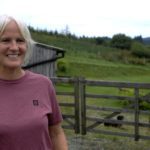 Nia O Malley farms 60 hectares in the Slieve Aughty Mountains in Co. Galway. She took over the family farm in 2010. Since then, she has worked incredibly hard to rebuild and regenerate the farm and has done so with respect and consideration for the natural landscape and wildlife of the area. “Something you learn as a hill farmer is you have to adapt to the area – you can’t just come in and change things as you wish… You have to adapt to the land and work with the land, rather than forcing the land to adapt to your farming practices.” Farming in a hen harrier Special Protected Area, Nia joined the Hen Harrier programme in 2018 where she was involved in a mountain grazing project. The trial focused on increasing cattle grazing on areas of bog/heath that are dominated by Molinia grasses and pose serious fire risks. “My involvement with the hen harrier project enabled me to look at my land differently and value what I might not have valued before… The more you graze commonage, the more you will reduce the Molina grass growth and the more you will encourage other grass species to come up. This will eventually extend the grazing season on the mountain.”  Interested in silvopasture and agroforestry, Nia has planted hedgerows and areas of native woodland around the farm.  More information and a film on Nia’s farm here.  Ambassador since 2021