Colm Gavin is an 8th generation farmer, farming in the Bundorragha catchment in Mayo. He farms 90-100 Mayo blackface ewes. The sheep are out on the mountain year-round, grazing the multi-species natural vegetation and maintaining the land. Colm operates an extremely low impact farming system and very few external inputs are required on the farm.

Colm is involved in the Pearl Mussel Project EIP. This project rewards participant farmers for the ecological quality of their land, which in turn contributes to the pristine water quality needed by the Freshwater Pearl Mussel. As part of his work in this project, Colm continues to remove invasive rhododendron from the mountain, as well as installing silt traps to capture excess sand/silt runoff from the land before it enters the river. He has also put in livestock bridges at various points along the riverfront to further protect the water quality. “Being part of the Pearl Mussel Project EIP puts value on land that we wouldn’t have considered highly valuable in the past. These areas have actually turned out to be the most important areas on the farm in terms of biodiversity.”

Passionate about the beautiful landscape and nature that makes up his farm, Colm sees himself as a caretaker of the land and hopes the pass it on to the next generation in better condition than which he found it; “as a hill farmer – all you're doing is maintaining the land.”

Nomination Description:
Colm Gavin farms in the Bundorragha catchment in Mayo. He farms 85 mountain ewes on a mosaic of peatland and wet grasslands. Colm is a participant farmer in the Pearl Mussel Project EIP. The Pearl Mussel Project rewards farmers for the ecological quality of their land, which in turn contributes to the pristine water quality needed by the Freshwater Pearl Mussel. Colm is farming in the top Freshwater Pearl Catchment in Europe.
Colm is an 8th generation farmer and is deeply passionate about the land he is farming. He is very conscious that he is caretaker of this land and wants to pass it on to the next generation in good condition.
Colm takes great pride in that fact that his farm runs along the main Freshwater Pearl Mussel River in the catchment and it is a testament to the farming practices of Colm and his family that it has one of the healthiest populations of the critically endangered Freshwater Pearl Mussel, not only in Ireland but in Europe.
Colm has been very generous with his time and knowledge in helping develop key measures for the Pearl Mussel Project. He has put in drain blocking measures and completed a lot of work on removing rhododendron from the farm. He has been quick to embrace these measures on his farm because he understands the reason they are needed. His enthusiasm in seeing the results and understanding the benefits of these measures for the habitats on his farm are one of the reasons he is in demand with other projects to speak to farmers about what he is doing and more importantly why is he doing it.
When asked about the future of farming in areas like Bundorragha, Colm feels that working with the landscape you are farming in is so important and preserving it for the future generations.
Nominator: Mary McAndrew, Catchment Officer, Pearl Mussel Project 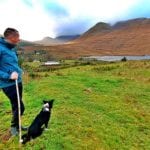 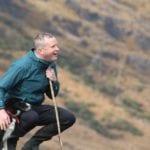 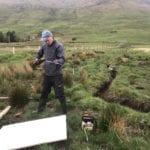