Peatlands include a range of habitats including raised bogs, blanket bogs and fens. Most raised bogs have grown from a lake basin and are typically surrounded by agricultural grassland (with very little farming on the bog itself) while blanket bogs tend to be much more extensive and form carpets across flat, or gently undulating, landscapes – these areas are typically grazed with sheep or, in some cases, cattle.  Raised bogs generally occur in the Midlands whilst blanket bogs are largely confined to the western half of the country and to mountainous areas further east with high rainfall levels.

Raised bogs generally contain deeper peat deposits (typically between 4 and 8 metres) while blanket bogs are usually shallower with a typical peat depth of between 2 and 5 metres. Over 92% of Ireland’s raised bogs have been lost through drainage, peat harvesting and afforestation, while some of our blanket bogs have been badly eroded as a result of past overgrazing.  Finally, fens range from very wet swamps through to calcareous meadows, with some being unsuitable for grazing, whereas others, such as fen meadows, provide grazing opportunities during late summer.

Why should I look after my peatlands?

Agricultural Benefits: Blanket bogs cover many of the uplands of Ireland and are an important habitat for livestock (mainly sheep) if managed sustainably. Over- or under-stocking of these peatlands will deplete the grazing resource and may lead to further damage such as erosion or fire. Healthy peatlands provide a huge range of ‘environmental services’ which, at a time of climate crisis, may attract significant payments from future agri-environment schemes given their importance in storing carbon, managing water and supporting wildlife

Ecological Benefits: Peatlands are one of Ireland’s most valuable ecosystems – they really are amazing in terms of their natural and cultural heritage (lots of important archaeological artefacts are found preserved in bogs, from butter to bodies!). Ireland is lucky to have 8% of the world’s blanket bogs, often forming a mosaic with upland heaths. Bogs provide habitat for a wide range of specialist plants that can survive the extreme conditions – in particular, a wonderful array of heathers, but also featuring ‘insectivorous’ plants (ones that eat insects!). They are also host to a range of wildlife; butterflies, dragonflies and damselflies, lizards and frogs, hares, and a variety of bird life, including many birds of prey. Peatlands also help filter water to keep it clean.

Climate Benefits: When they are in good condition, peatlands act as a major carbon store, trapping climate-damaging greenhouse gases. Peatlands act as a large store of carbon, where it is stored in the form of peat. Peatlands in good condition will continue to accumulate carbon, while degraded or drained peatlands slowly release their store of carbon to the atmosphere. In Ireland, we have lost 80% of our total peatland habitat, releasing millions of tonnes of greenhouse gases in the process. Peatlands cover only 3% of the earth’s surface yet they store at least twice as much carbon as all the earth’s standing forests. Peatlands also act as a critical piece of natural ‘infrastructure’ in defending against flooding as they act as massive natural ‘sponges’ which soak up a lot of water and release it gradually – thus helping adapt to some of the negative impacts of climate change. 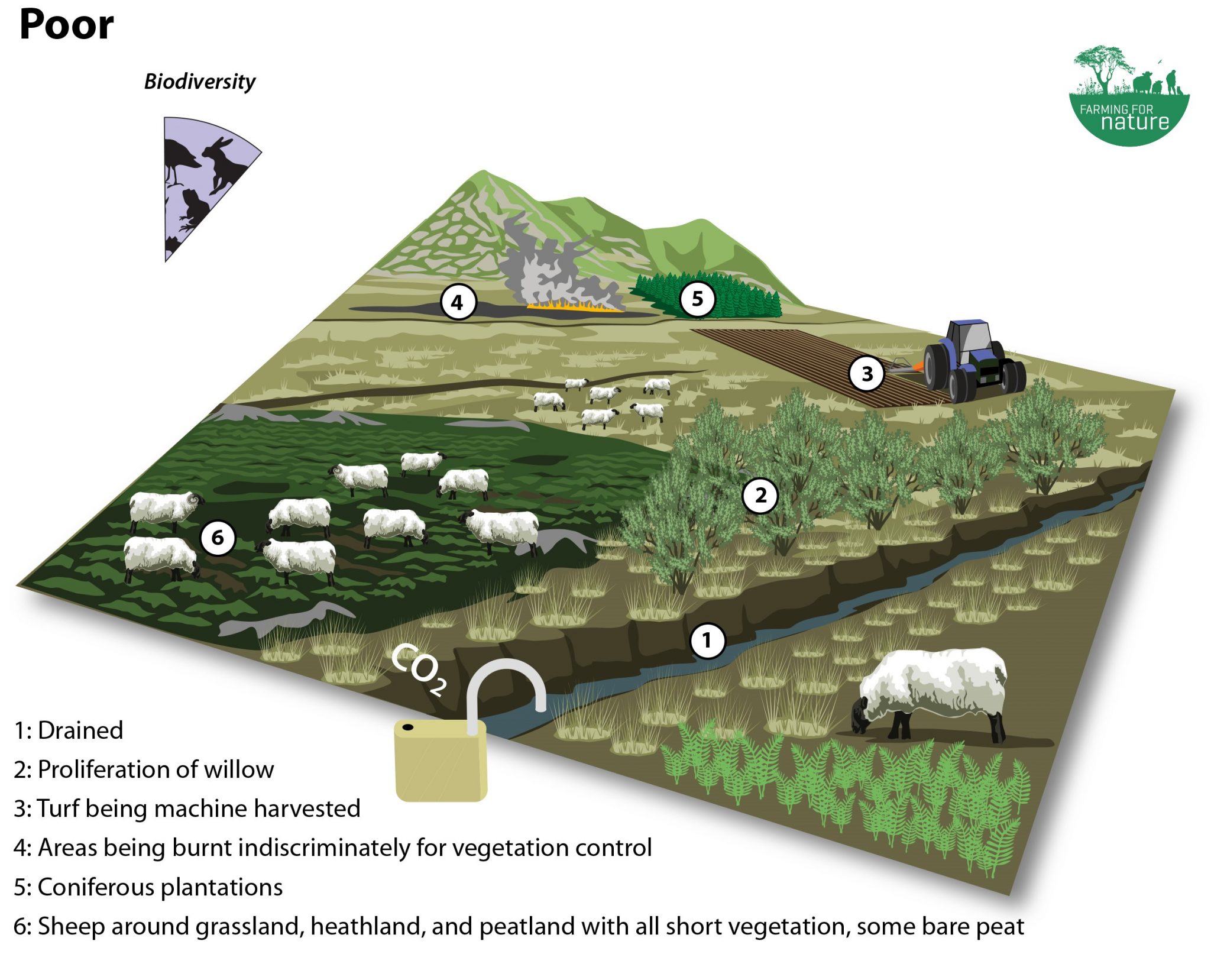 How do I manage my peatlands?

Looking for more information for your farm, search by