‘So you have bog on your farm, what now?’ 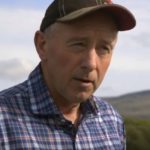 Tommy manages his 100-acre organic Aberdeen Angus suckler farm on the shores of Lough Allen, Co. Roscommon. He has been farming organically on the site since 1996 with a clear focus on nature and habitat conservation. His farm has high natural value with a variety of habitats such as intact raised bog, mature native woodland, species rich acidic grassland, wildflower meadows, lakeshore and river.  Tommy’s active role in local conservation has inspired others to follow his example in promoting nature on their own lands.  “We have lost of a sense of connectiveness under our feet and once we get that reestablished we will be on our way to a healthier planet”   More information and a short film on Tommy’s farm here.  Ambassador since 2019

‘What is a Fen and Why is it Important?’

What is a Fen?

A fen is a peat forming wetland system with a permanently high water level, at or just below the surface. Fens are less acidic than bogs and have higher mineral levels so they can therefore support a much more diverse community of plants and animals. Plants that thrive in a fen environment include a large variety of trees, shrubs, herbs, grasses, sedges, ferns, mosses and algae. Many have special adaptations such as shallow roots or hollow stems that allow them to grow in this saturated environment.

Why are Fens important?

There are approximately 1,700 fen sites throughout Ireland but it is estimated that 77% of fen habitats  has  been lost through land reclamation, drainage and infilling. Fens are a unique feature in the Irish landscape, which like bogs, are a rich resource to our history. They support a variety of plants and animals while at the same time regulating water flow and acting as carbon sinks.

The fen on my farm in Kildare lies at the bottom of a gentle hill and is fed by nearby springs which are rich in calcium. It is therefore regarded as a ‘calcareous fen’ which are quite rare and usually small in size. The calcium laden water has deposited a white crust known as ‘tufa’ which is found under the thin soil. The pH of the fen is extremely high and the fen covers an area of 2.5acres. Until recently we always referred to the fen as ‘the bog’ and it was generally seen as a useless piece of land. A number of attempts were made over the years to drain it with drains dug around the perimeter but thankfully these never succeeded. The land was always too wet to allow machinery work so the area was only used as rough grazing during the summer, and in general it was a ‘forgotten’ part of the farm.

In 2021 our neighbour Dr Melinda Lyons, carried out a survey of the fen as part of her PhD and drew our attention to its significance and the importance of preserving it. A comprehensive list of the plant species was made by Melinda. She ranked the plant species by their importance and these included fen bedstraw, tawny sedge, long-stalked yellow sedge, blunt flowered rush, curled hook moss and apple moss.

My first effort to protect the fen was to fence it off and keep all livestock out. However, this resulted in the stronger rushes talking over and out-competing the smaller plants. I have now erected a temporary electric fence across the fen and allow cattle to graze the driest half for a few weeks in late autumn and then again in the early spring (if ground conditions are dry enough). Poaching the ground must be avoided as the soil is thin and the delicate sedges, mosses,herbs etc are easily damaged.

The cattle are then locked out the fen from late April through to October. In the future I hope to purchase a very small herd of highland cattle and use them for grazing the fen as they would be lighter than my continental cattle, and perhaps less ‘choosy’ about what they eat! I think the key to grazing sensitive areas like fens is to be flexible and be ready to move cattle quickly if ground conditions deteriorate while also being mindful of ticks that bring on redwater in the cattle.

My hopes for the fen in the future would include snipe remaining to breed and attracting the marsh fritillary as the devil’s bit scabious is starting to grow around the two small ponds I have dug out. The fen has become a ‘treasured’ part of the farm where an abundance of wildlife can be observed on a warm summer’s evening,from hawker dragonflies to reed buntings and swallows gorging on the myriads of insects. It truly is a unique habitat that we are only starting to discover. 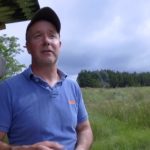 Stephen is a full time farmer with an 80 cow suckler herd, taking all progeny to finish.  He is not organic but is transitioning away from inputs.  He also has a tillage and forestry enterprise in place. Whilst the farm is busy and productive, Stephen farms in a balanced way that he has a low impact on the wildlife that live and breed on these lands. He continues to add biodiversity each year. He has fenced off the watercourses on the farm and allowed riparian margins to develop along these areas. “The biggest eyeopener for me was when I fenced off the water courses what I noticed was how much nature just came back and took hold over the years” He has dug out a network of ponds in an area of fen to provide a habitat of any aquatic species that may colonise this special area.  He planted 18 acres of native woodlands, also has a 2-acre plot that is in wildbird cover for the past three years. Additionally, a wildbird area has been planted with bushes and trees specifically chosen for their potential to provide nuts and seeds for birds located alongside the Hartwell Stream that flows through the farm. The most recent addition has been a forest garden planted last winter – the acre plot is full of bushes and trees but each one of the 150 plants will produce fruit, nuts or seeds.  “It is about giving nature a chance, and sometimes it is more about what you don’t do than what you do”.  More information and a short film on Stephen’s farm here.  Ambassador since 2020

Go to our main Groundtips page to see what other subject areas have been covered by our network of farmers, bringing their tips and advice to you straight from their farms.