Simon and Ru Kenny took over the family farm in 2018. Years of intensive tillage had taken its toll on the land and they decided to move away from conventional tillage farming – “there were no more worms in the soil, the birds had stopped coming. There was no vibration to the soil.” The land was resowed with a high clover and rye mix in 2018 and no chemicals or fertilizer have been used since.

Simon and Ru have been waiting patiently as the soil recovers and regenerates. On the farm there are now fields of rich pasture containing a mix of grasses, legumes and wildflowers. The land has been given time to rest and the pasture has been lightly grazed by sheep. “The grass hasn’t gotten any fertilizer or manure in the last 3 years – sunshine, rain and grazing seems to be doing the trick.” Simon and Ru plan to introduce cattle to the land this year and implement an agroforestry and holistic planned grazing system.

There are 5 acres of mature woodland around the farm. Simon and Ru continue to plant a variety of native trees around the land to encourage as much wildlife to the farm as possible. There are buzzards, swallows, starlings, sparrowhawk, kingfisher and snipe around the land – all of which have returned since they resowed grass on the farm. They planted an orchard and have been restoring hedges around the farm which has positively impacted biodiversity on the land. The couple have many ideas and plans as to how they will develop the farm into the future, all the while keeping consideration and respect for the environment at the center of what they do.

Nomination Description:
In any sector, the demographic of practitioners at different stages, young, old, beginners, and experienced are all-important for that sector's health. Simon and Ru Kenny are a young couple returning to Simon's family conventional arable operation and putting the breaks on. They witnessed the soil's degradation through intensive tillage and synthetic fertiliser applications, and made a brave move by deciding the first step was to stop. After the last grain harvest, Simon sowed diverse pasture mixes and let the land heal. Healthy pastures need well-managed ruminants, so they used a flock of sheep to manage the pastures in the first year but now they plan to introduce some light framed cattle as the main future enterprise. Observing and restoring soil function are the first steps for this operation. Together they understand we can have a powerful positive effect on our environment, and we need to learn to participate meaningfully in the work of living systems. While the pasture and soil are doing their thing, they are focusing on planting areas of native woodland and restoring the hedges on the farm through the ancient process of hedge-laying.
Nominator: Clive Bright, FFN Ambassador 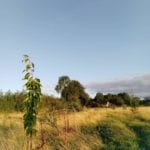