Rob Coleman farms with his father Billy near the village of Castlemagner in North Cork. They manage a mixed tillage and stock farm, with tillage being the main commercial aspect of the farming system. Rob and Billy run a calf-to-beef system and a flock of 150 breeding ewes. Much of the grassland is extensively managed and Rob is incorporating clovers and multi-species swards into the pasture. A wide range of crops are grown on the farm for the animal feed market. The tillage has been managed via min-till for some 20 years, and the past 5 years they have incorporated the principles of conservation agriculture and adopted some no-till operations. Nitrogen fixing and pollinator friendly cover crops are included in the crop rotation and farmyard manure is composted on-farm and spread on the land to increase the organic matter content of the soil and regenerate the soil biology. The sheep are incorporated into the cereal cropping rotation. These conservation practices increase soil biological activity, improve structure, reduce water run-off and sequester carbon from the atmosphere.

The use of cover crops on the land has greatly increased the population of birds and insects on the land, particularly yellowhammers, buzzards and pheasants. There are pockets of woodland around the farm and an area of wetland and a pond which was been fenced off and left for biodiversity and wildlife. Wildflowers have been planted in field corners and margins. Rob is passionate about finding ways to incorporate biodiversity into his productive farming system – "Finding the balance between production, finance and the environment has been a central part to the development of our farm."

Nomination:
Rob Coleman farms with his father Billy near the village of Castlemagner in North Cork, where they grow a wide range of crops and integrate cattle and sheep into their farming system.
Rob and Billy have always been fascinated by soil health and environmental conservation / regeneration. On their enterprise, they gave up using the plough around 20 years ago, changing to minimum till system to establish crops.
After joining BASE Ireland in 2016 Rob began a journey in adopting numerous conservation Agriculture practices. Improved crop rotation has been a key addition supporting their more recent move to no-till crop establishment across a large part of the enterprise. Multi-species cover crops also form part of the fabric with the Coleman’s ensuring cropping plans are as diverse, biologically supportive and environmentally protective as possible. These conservation practices increase soil biological activity, improve structure, reduce water run-off and sequester carbon from the atmosphere. Covers are sown early and grow well in the Cork sunshine, creating a fantastic habitat for pollinators in late autumn and beyond when the various species come into flower. A thriving year round eco-system is the goal both Billy and Rob strive for while ensuring their farming and food production achieve their objectives in harmony with that thriving eco-system.

Sheep have been brought on to the cropping land over the winter to graze cover crops to add further improvements in soil biology and increase soil carbon storage. Rob and Billy have more recently begun to experiment with grazing a growing cereal crop with sheep to assist better tillering of the plants. In effect using the sheep as a natural growth regulator on the plant.
Rob commenced a composting outfit in 2019 as an attempt to bring the organic manures to life by increasing microbial activity before spreading on the land. This adds more to the land than just the chemical nutrient value and ensures a more holistic natural product teaming with life, is ready for the soil before spreading.
Rob has adopted the Albrecht soil balancing approach to soil nutrition discovering benefits of using magnesium to help balance out the high calcium soils in what is mainly a limestone area. This ensures more efficient use of nutrients by the plants, less soil run-off, healthier plants with less diesease, easier establishment through more friable soil structure and healthier animals and humans who consume a more nutritionally balanced and healthier food source.
Keen to experiment and make improvements to the system, Rob uses liquid fertiliser to ensure accurate application of nitrogen and adds carbon sources to help to buffer nitrogen and protect soil carbon from losses. This has supported an annual reduction of N usage on the farm and ensures the safety of water courses from nitrate pollution.
Aphicide usage has been greatly reduced and wild flower areas have been introduced across the land to support the beneficial insect population on the farm.
Through membership of BASE Ireland, the Coleman’s have continued to carefully build knowledge and experience as they slowly take the farm from a traditional conventional tillage farm twoards a more efficient, environmentally friendly conservation agriculture model.
Rob firmly believes in the benefit of discussion and debate on all farming matters to make progress towards a better future. He strongly believes in being open to alternative opinions, listening to and having respect for people that you may disagree with so that better relationships can develop between farmers, environmentalists, consumers and policy makers.
This, he believes, is essential in working towards a future where nature, farmers livelihoods and food production exist in harmony and even thrive, achieving the ultimate objective of supporting life on our planet over both the short and long terms. 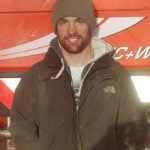 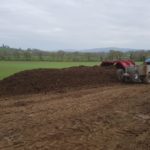 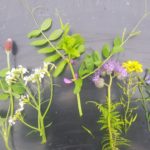 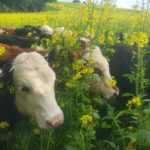 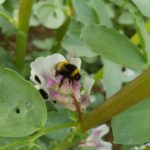 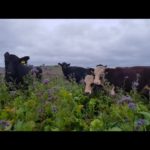 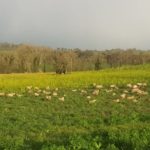