Reuben Cope manages his family farm at Shankill Castle in County Kilkenny. Himself and his wife Ellen run an on-farm café called the Coach House Café. Since taking over the farm, Rueben has been trialling different farming methods that enable him to run a productive farm all the while protecting and enhancing biodiversity on the land. He converted the farm to organic in 2019. The home farm is good land and mature, permanent grassland. Rueben runs a herd of 40 sucklers, producing organic beef that is supplied to their café. Part of the farm is in county Kildare, where Rueben grows about 47 acres of organic oats and 20 acres of heritage wheat, both of which are supplied to The Little Mill in Kilkenny, and subsequently made into bread which is also sold in the café. There is a market garden and all of the vegetable produce is supplied to the café.

Reuben is always looking for ways to conserve nature on the land. He uses green manures and winter cover crops to build soil biology and provide a food source for insects and birds. There is a pond and a stream on the land, as well as about 15 acres of mature woodland, all of which provide a fantastic habitat for wildlife. Hedgerows are managed for biodiversity. Rueben has put up bird and bat boxes around the land and he also sows wild bird cover strips. “Lots of bird species are returning to the land. I've seen the woodpecker on the farm in recent years, which is the first time in my living memory”. They incorporate pollinator friendly flowers into the vegetable beds throughout the growing season.

Nominator:
Reuben Cope is an organic suckler-to-beef and tillage farmer based at Shankill Castle, Co. Kilkenny. His cattle graze a species-rich permanent pasture surrounded by mature woodland. Since converting to organic in 2019, he has been working at diversifying the farm, while focussing on regenerating the soil and conserving natural habitats. Green manures and cover crops are essential to regenerating the soils and creating a food source for the wildlife on the farm. He says that he is learning every season about what he can do to facilitate nature. Going organic for him was the first step in farming with nature. New areas of diversification include growing heritage wheat for a local mill, and vegetable production in the Victorian walled garden. Reuben and his wife Ellen also run a farm-to-fork café, the Coach House Café, at his family home Shankill Castle. The walled garden next to the café is the source of most of the vegetables and fruit used in the food served, as well as his beef, wheat and oats on a seasonal basis. Jam, apple juice and seasonal vegetables are also on sale at the café. The gardens at Shankill Castle (including the walled garden, and with views of the surrounding farm), are open to the public, and he holds various public events through the year, including participation in the Carlow Garden Festival, when Shankill usually has a talk from a horticultural speaker (past speakers at Shankill include Klaus Laitenberger and Charles Dowding).
Nominator: Suzanna Crampton, FFN Ambassador 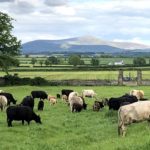