Randal inherited the estate in 2011 and took on the ambitious rewilding project in 2014. Since then, he has made it his mission to reintroduce native flora and fauna to the land in a natural and organic way. Of the 1700-acre estate – some 950 acres of tillage farmland is rented to local farmers and the remaining 750 acres are dedicated to the nature reserve. There is 500 acres of mature woodland on the farm, most of which is old-growth broadleaf forestry such as oak, beech, elm and redwood. A lot of the deadwood in the woodland is left to decay naturally, acting as a crucial habitat for various insects and fungi. There are natural meadows containing diverse grasses and wildflowers. Randal has continuously planted trees and native hedgerows on the land.

Since its inception, Randal has taken immense pleasure in witnessing the return of a vast array of wildlife to the reserve. Numerous birds have returned to the land, many of whom have not been recorded in the area for a long time. Among the bird species are red kites, woodpeckers, barn owls, long eared owls, herons, jay birds and sparrowhawks. The reserve is also home to red deer, foxes, otters, badgers, pine martins, hares and stouts. Randal has been working with Bee Conservation Ireland and the plan is to introduce hives of native Irish black bees to the reserve.

Randal is also working with various institutions to conduct research on the flora and fauna of the land. He is passionate about sharing his rewilding experience and inspiring others to undertake their own rewilding venture, no matter how big or small.

Nomination Description:
Randal Plunkett made a difficult decision 6 years ago to convert part of his 1600 acre estate to ‘rewilding’. At present approx. 750 acres are dedicated to the reintroduction and preservation of native species to the area in county Meath. It was a difficult decision to make and required a significant financial sacrifice, however due to the remainder of his estate in tillage and forestry he has found a way to make rewilding financially sustainable. Randal believes that the biodiversity from the rewilding land has had a positive impact on the crop yields in his land dedicated to tillage as well as neighbouring tillage farms. This, in addition to ensuring other good biodiversity practices such as replanting and maintenance of native hedgerows has also been beneficial to tillage output in the area.

Randal has had several owl boxes donated to him by neighbouring communities, these have been a huge success and it seemed that as soon as the boxes were up on trees, that overnight they became inhabited by families of barn or long eared owls!

The woodpecker has now returned to county Meath thanks to Randals rewilding project. Previous to this, woodpeckers were only spotted in parts of Wicklow, now they are spotted abundantly in the estate. Further species have also taken prevalence within the bird population in the estate. Birds such as herons, red kites, jay birds and sparrow hawks. Along with birds there are red deer, otters badgers, hares, pine martins and stouts living on the estate.

Randal allows a certain number of dead trees to naturally decay. This holds carbon along with fostering habitats for fungi, insects and the woodpeckers, who require dead trees for pecking into to make their homes.

Randal is linked in with Kildare animal foundation and Drogheda animal rescue and through these charities Randal has released hedgehogs, foxes, pheasants and other wild birds into the estate.

The Irish Bee Conservation project is currently working with Randal whereby this spring they will place 8 bee hives around the estate with the intention of supporting the native black bee to thrive in the area. Such a project will only further enhance the estates tillage land and also neighbouring farms. Due to the rewilding project the bees will be sustained through the wildflowers growing in the meadows of the estate.

A number of organisations are excited by Randals project including the botany department at Trinity College, whereby last year researchers began studying the diverse species of insects and plants on the estate. Bird watch Ireland are also welcomed to the estate and have confirmed the aforementioned bird sightings, they are logging their sightings into their bio data centre.

Randals financial sacrifices have paid off in leaps and bounds through the satisfaction of seeing various species return to the area. This immense pleasure has also been enjoyed by the local community and surrounding areas. Randals courage and vision is an inspiration to others who may want to replicate this project at varying scales.
Nominator: Pádraic Fogarty, Campaign Officer, Irish Wildlife Trust 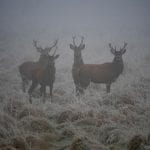