Paul Moore runs a tillage and beef farm near Middleton county Cork. The mixed 140-acre farm is comprised of 95 acres of tillage, producing malting barley, spring beans, winter barley and oilseed rape. Paul has recently began incorporating regenerative practices on the farm such as the use of multi-species cover crops, longer crop rotations and strip-tilling the spring beans. While he is in the early stages of experimenting with such practices, he has noticed an increase in earthworms in the soil on parts of the land. The remaining 45 acres is mature grassland and is used to produce 35 Hereford and Angus beef cattle. Paul cuts silage off the land which is used for winter feeding.

A wildlife and bird enthusiast all his life, Paul is passionate about nature conservation and managing habitats on his farm. Over the years he has planted trees on the land, managed hedgerows for birds, incorporated wildflower margins around field boundaries and increased the nature corridors where possible on the farm. The land is home to many bird species, many of whom are becoming scare in the Irish countryside. There are barn owls, stock doves, swifts, ravens, buzzards, reed buntings, yellowhammers, meadow pipits, stonechats, starlings, house sparrows and more. Foxes, stoats, shrews and rabbits are also a common sight on the farm.

Paul is an advocate for an economically viable and productive farming system, that simultaneously protects farmland habitats and enhances biodiversity on Irish farms. “My whole mantra would be – you don’t have to manage a nature reserve, if every farmer did a little and did it properly, it would all add up and have an impact.”

Nomination Description:
To walk across Paul’s farm in the winter is a delight. Big flocks of Skylarks and Meadow Pipits rise out of the winter stubble fields, whilst the wildbird cover crops are full of Linnets and Goldfinches. Posts provided for Barn Owls to perch on in the cover crop show that these areas are also home to good numbers of small rodents. The hedgerows surrounding the fields are dotted with Reed Bunting and the beautiful Yellowhammers.
Paul is a keen birdwatcher which is truly reflected in the way he runs his farm. Paul farms 140 acres on the edge of Midleton, the majority (some 95 acres) are tillage. He mainly grows barley with some wheat, beans and oilseed rape. Unlike the majority of tillage farms in the area, the hedgerows on his farm are tall and mature with a mix of native species. Some sections of hedgerow though are kept short and dense in order to provide ideal nesting habitat for Yellowhammers. To further improve the farm for birds, there are wildflower margins around the tillage fields, stubbles are left overwinter or areas of wildbird cover are grown. Field margins are not sprayed with insecticide, he prefers to allow natural insect predators to deal with some of the pests and winter stubbles are also left unsprayed to allow a green cover to develop. Cover crops are grown over winter to help improve the soil, reducing chemical inputs, soil erosion and benefitting soil invertebrates.
Cattle graze the 45 acres of grassland on the farm. The low-lying fields are left undrained and patches of rushes occur in these fields, much to benefit of birds such as Reed Bunting. Again, the hedgerows are managed to have a diversity of heights, to the benefit of nesting birds, whilst some of the south facing hedge banks have small scrapes to provide areas of habitat for bees. Bird and bat boxes have been put up around the farm, some of which are used by the increasingly scarce Stock Dove.
Away from the farm, Paul is a committee member of the Cork Branch of Birdwatch Ireland, providing talks and events to enthuse other people to become passionate about our wildlife. He is also one of the driving forces behind the highly successful and exciting Harper’s Island Wetland nature reserve on the edge of Cork City. If ever anyone practiced what they preach, Paul certainly does, and it shows on his farm. 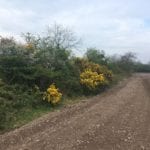 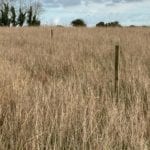