Nicholas Redmond is a mixed stock organic farmer from north county Wexford. He farms sheep and Dexter cattle. There are also chickens, donkeys and alpacas on the farm. Approximately 18 acres of the land is under forestry – some an old-growth Oak forest and the rest a mixed broadleaf forest. There is an orchard on the farm and the family grow a variety of fruits and vegetables for the home.

Nicholas operates a low-impact, high nature value farming system. The animals are part of a mixed rotational grazing system, where they play an important role in regenerating the soil biology. Very few external inputs are used on the farm – no chemical fertilizer, no concentrates and minimal machinery. The pasture on the farm is species-rich grassland.

Part of the farm is comprised of a 4-acre traditional hay meadow. This pasture is extremely species-rich and full of native Irish wildflowers and grasses. Nicholas is working with Irish Wildflowers to harvest seed every year from the meadow. These seeds are then redistributed to other farms/areas around the country, helping to ensure the vitality of these species.

The variety of different plants and trees around the land make it extremely biodiverse as well as attracting much wildlife. On the farm there are numerous birds such as buzzards, jaybirds, woodpeckers, wrens, robins, finches, blackbirds and thrushes. There are also foxes, badgers, grey squirrel and hedgehogs. Nicholas is passionate about nature conservation and a firm believer that farming activities should not impact in a negative way on the land - “I would see myself as more of a nature warden who is also a farmer.”

Nomination Description:
I had occasion to visit Nicholas Redmond on his lands located at Parknacross, Ardamine, Gorey, Co. Wexford last August to view an area of species rich grassland partially enclosed by old oak woodland and close to the sea at Ardamine. I was accompanied by Maria Long Grassland Ecologist NPWS and Wesley Atkinson Regional Manager Wicklow Mountains National Park.
This is a most unusual and valuable area of species rich grassland and is like an oasis in the midst of a highly developed area with mobile home parks, holiday homes and associated land uses. The fact that this treasure has survived to this day is testament to a traditional style of farming practice in "Farming for Nature" of the Redmond Family over the years. The grassland is a highly valuable seed source for many once widespread species in the Irish Countryside and Mr Redmond has arrangements to harvest seeds produced so as they may be re-distributed to other areas for restoration projects etc. Nicholas is passionate about nature and believes that farming activities should not impact in a negative way on the land. His farming style reflects this low impact and is evident around his farm. Nicholas is very knowledgeable about nature and is excellent at imparting his knowledge to others. I have great pleasure in nominating Nicholas Redmond for the Farming for Nature Award Programme.
Nominator: Eamonn Doran, Conservation Ranger, NPWS 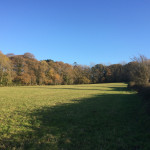