Michael Silke is an intensive dry stock and sheep farmer in the Shannon Callows. His 125ha farm is made up of “upland” (land that does not flood), and “callow land” (the portion designated as a SAC and SPA that is subject to flooding for up to six months of the year). His land on Inishee island is a nationally important breeding wader site for Lapwing, Redshank, Curlew and Snipe. All bar Snipe are red listed species of conservation concern in Ireland, while Curlew has recently been added to the IUCN “near threatened” with extinction list. Michael is being nominated for the significant contribution he has made to the conservation of these species at both a regional and national level.
Since 2005 Michael has wholeheartedly engaged with breeding wader conservation projects. In addition to research, numerous schemes and management elements have been trilled on his land, such as:
- a breeding wader wet grassland prescription (adopted into GLASS)
- a Specialist Advisory programme
- a Capital Works programme for the enhancement of breeding wader habitat
- the first predator proof fence in Ireland for the exclusion of fox and mink from a breeding wader site, and the first mink proof fence in the UK and Ireland
- the first species focused results-based scheme in Ireland
This work has informed our knowledge of the factors affecting breeding waders at a regional and national level and has directly influenced national conservation policy. Each of these elements have become standard conservation practice for breeding waders nationally and have made their way into successive schemes (RBAPS, HELP and CABB projects, Curlew EIP) and the national agri-environmental programme (NPWS Farm Plan Scheme and GLASS). Their reach has not yet been exhausted.
The significance contribution that farmers like Michael make by partaking in conservation trials often goes unrecognised. During the trial stage the options were not formally costed or appropriately paid, and they were subject to change between years, making planning whole farm enterprises difficult. While participation in the specialist advisory programme was on his own time. Habitat restoration works added nothing to the farm enterprise, they removed shelter for livestock; created wet features and raised water levels, when agricultural objectives were to get water off, stock out and eliminate Redwater disease. The predator fence impacted his daily stock management and resulted in a loss of grazing. None of these elements were compensated during the trial stage. However, at all times Michael was absolutely committed to the overriding objective, to develop management options that would influence breeding success for waders.
Michael has acted as an advocate for farmer engagement with bio-diversity related schemes. Inishee has been used to train other farmers, to influence national policy makers, to inform international wader experts, and to publicise breeding wader conservation through television, radio, and print media. Michael himself, has helped deliver farmer training workshops, met and engaged with policy makers, participated in many radio broadcasts and sat on Local Advisory Groups, to help inform development of locally led waders schemes. 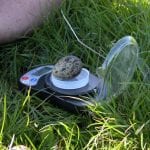 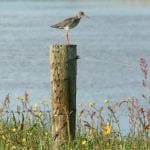 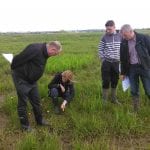