Description:
Michael McManus hails from county Leitrim where he farms a suckler herd over 180 acres. The organic farm is comprised of 3 distinct areas. The first is described as ‘rocky outcrop’ land, the second is ‘sandy loam’ land and the third he describes as a ‘shale type’ land. All three of these distinct areas contain their own rich variety of grasses and vegetation. Michael operates a rotational grazing system, whereby the animals are moved from one area to the next throughout the year. They are moved in accordance with the stage of growth they are at or whether they have calves on them at the time – “I firmly believe that having different plant types for cattle to graze on provides them with a wide range of minerals and nutrients. I think cattle have natural curiosity that needs to be satisfied – they enjoy grazing different areas that have different types of vegetation.”

The natural meadows have not been reseeded and provide great biodiversity on the farm. “The grazing of this type of land with cattle helps promote the natural vegetation here. The only management of the land is the cattle grazing, then letting the grasses and flowers grow (buttercup, rushes, meadowsweet and so on) then cutting the meadow for hay/silage later in the summer.” The cattle overwinter outdoors where they are supplemented with some meal and hay/silage that is made on the farm. Relying on very few external inputs, this farm is self-sufficient and resilient.

There is a well on the farm that produces Sulphur water, in the past this well was used by people with various ailments prior to modern medicine and many still visit the well today. Michael is interested in agroforestry, permaculture and preserving traditional methods of farming. He values nature, heritage and biodiversity on his farm. There is a wide range of mature trees on the land such as alder, spindle, oak, holly, blackthorn, hazel and hawthorn. “The 2 things that I value the most on my farm are the land and the water. I want to protect them at all costs and the rest will follow...that’s my belief.”

With that is mind they are producing beauty products at Spa Cottage from the sulphur springs that exist on the farm. They are also at an advanced stages of developing an old sweat house on the farm and to develop heated spas using solar and hydropower on the farm as an ecotourism business. The sulphur spas were first recorded in the 16th century on the farm but it is believed that they are probably of Celtic origin, used by them and were known always to have positive dermatology results.

Nomination Description:
Michael Mc Manus farms 60 ha of mixed Leitrim land in 3 blocks of varying habitat types The land has been in Organic Farming since 2016 and the farmer also joined GLAS in te same year. The enterprise is a Suckler herd producing store cattle sold at the local Organic mart Michael is also secretary of Leitrim Orgabic Farmers Coop and has been active in the Save Leitrim and anti -fracking campaigns locally.
Spa Cottage Farm – Carrick in Shannon (Home farm)
This block has a unique spa well bubbling sulphur water up into a well. This well was used by people with alments prior to modern medicine being available before 1960 Michael is now in the process of restoring the well and hops to open it up to the public again He along with his partner Yvonne are developing a Sin care product based on the spa water with assistance from the coop and Leitrim Integrated Development Company

Block 2 Sheebeg, Keshkerrigan
This block of land is a raised area of limesone land flat on top with lovely fields with stone walls and old whitethorn specimans.The steeply sloping sides have lost of nativespecies such as spindle, oak, holly, blackthorn, alder and hawthorn which provide shelter to the out wintered cattle 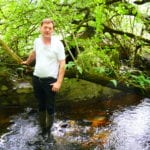