It is a privilege to nominate John McHughs as a 2020 Farming For Nature Ambassador.
Anytime Ive visited John’s farm I was alway’s Inspired and Relived.

I was Inspired: To see his energy and focus in ensuring the farm and land he inherited from his father would be there for his children and their children. Exactly the type of attitude and timescale we need when farming with and for nature. It was very clear to me he is connected to his land, grateful for the opportunity to be a farmer and determined his children have the same opportunity. Not just to make money from their farm but to have a have a sustainable, resilient and happy lifestyle.

I was Relived: To see a farmer adapting from a commodity, chemical and profit driven production system of dairy farming to one that is focused on family succession, Long term environmental and nature based farming. A farm that is being built around supporting and developing his local community.

A bit more of info on John and his transition towards farming for nature.
John McHugh started farming in 2001, inheriting a mixed farm that included dairy, beef, sheep, cereals and sugar beet. Like many other farmers John started to increase his dairy herd as milk quota became more available and in 2015 he was a heavily stocked intensive dairy farmer.
He was constantly niggled by a feeling that he was trading resilience for short term profit and in 2015 he decided to change course and set out on a journey to regain the lost resilience. This opened his eyes to a fascinating perspective, of embracing the complexity and wisdom of nature rather than the constant battle of undermining her.
He began conversion to organic in 2016 and quickly began to embrace diversity in all its forms. Diverse pastures were sown, he began practicing holistic grazing, a process that allows pastures to flower and seed enabling some natural succession to take place and bringing about huge jumps in insect populations. Plants that were once seen as foes now became friends trying to reinstate balance and re-mineralize soils.
He also began to embrace the principles of Permaculture, converting pastures to agroforestry and lining cow access roadways with fruit and nut trees.
Pigs were introduced to the farm as another means of promoting diversity, helping to break the dominance of perennial rye grass and create opportunities for other plants.
Oats are sown to provide the straw and grain requirements and the surplus is sold to Flahavans for organic porridge.
In 2018 he decided to follow natures lead in obtaining resilience through diversity by embracing a diversity of people who engage with the land.
This saw the birth of the Clondarrig community farm project and opened the doors to co-operation with others who wanted to re-connect with nature.
Annette Morris Keane and Clondarrig Earth school runs events allowing the younger generation to learn practical skills and enjoy the freedom of nature,
Zilya Harms, a herbalist brings groups on walks around the farm helping us to learn about some of the amazing plants already on the farm, they hosted a cob workshop building a cob pizza oven for national heritage week in 2019 and 2020 has already started off with exciting prospects welcoming Dave Beecher, Rob Carroll and Eve Daly to the fold, all bringing their own unique insights and talents to the farm. 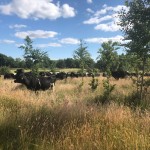