Graham Harris took over the family farm in 2003 and continued to farm the land conventionally until about 5 years ago. Since then, he has been gradually moving away from intensive systems towards holistic, regenerative practices. Guided by biodynamic principles, Graham has been focusing on “removing as many harmful practices from his farming system as possible”. The farm is now certified organic. In order to bring the land back into balance, huge focus has been on rebuilding the soil microbiology - “I firmly believe if I can get the soil right, then I don’t have to worry about much else.”

The 170-acre farm is comprised of a mixed sheep and tillage enterprise. Cereals produced include organic oats, along with pea and barley combi-crops for animal feed. Graham uses a diverse variety of cover crops on the land throughout rotations – “incorporating cover crops that feed the soil and feed the pollinators.” Aiming to move away from mono-cropping, Graham has started experimenting with growing an understory of clover with the oat crops. Farmyard manure is composted and spread on the land as a fertilizer when necessary. Biodynamic preparations are also used on the land to regenerate the soil biology.

Graham runs a flock of 130 Belclare/Charollais ewes, producing organic spring lamb. He has incorporated herbal leys into the grassland to increase plant diversity and build soil biology. Graham produces his own hay, silage and straw for the livestock enterprise, thus reducing external inputs required on the farm and building farm resilience.

Where in the past nettles and weeds would have been sprayed, Graham now encourages wild patches of plants to grow around field boundaries which act as nature corridors and provide habitats for birds and insects. He believes that healthy, balanced soil is the foundation of the farm ecosystem and operates under the manta of “only taking as much as I need to take from the farm and leaving the rest for nature.”

Nomination Description:
Graham Harris began farming organically on January 1st 2019 with the Irish Organic Association and all going well on January 1st 2021 he will have his full organic licence and can sell his products directly into the organic market. Graham farms in Donadea in Co. Kildare and had been farming conventionally for 20 years before he took the plunge to convert to organic farming.
“Honestly, I don’t know why it took me so long to convert, particularly since my brother has been an organic farmer for almost twenty years now and has been a great repository of information and guidance for me on organic farming. I suppose when I was younger, I was really interested in focusing on big outputs and high yields, so organic did not appeal to me. However, over the years I realised that continually pushing the farming system to achieve big yields resulted in big offtakes and required more and more inputs to realise those yields. Also, I found it very disheartening as a farmer to be producing products that essentially no-one wanted and prices barely covered production costs. So, by converting to organics I hope that I can access a market that is expanding and where people are prepared to pay a little more to farmers for the quality of the food that they produce” said Graham.
Approximately 90acres of the land is in grassland with 70acres in tillage. Graham has 140 ewes and 160 lambs and is moving increasingly towards the Belclare breed. “Obviously for farmers converting to organic one of the main concerns is stocking rates, which was not an issue for me as I am stocked relatively low but this is certainly something that must be an important consideration. Grass productivity is another concern, you worry that you will not have enough grass, however I have been amazed at how the clover has performed whether it is the organic clover varieties I cannot say for certain. The clover/ryegrass fields are outperforming any conventional grass fields that I had and pushed really hard to yield well in the past. The sheep just thrived this year and half the lambs are already sold. The only grass field that did not do well was a modern re-seed, my plan in the future is to sow herbal leys such as yarrow and chicory for their anthelmintic properties for the sheep” he outlined. 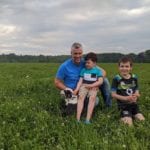