Gerry Fitzsimons is an organic beef farmer from Co Cavan. Having farmed conventionally for some years and seeing the damage that some of the conventional farming practices were having on nature on his land, he decided to go organic and farm in a more holistic manner. Gerry used to run suckler farm, but he now buys in a small number of angus bullocks every year and fattens them on the farm before selling them, mostly direct to customers via his meat scheme. Gerry has been running a grass-fed beef system for some 20 years. There is about 6 acres of birch woodland on the farm, and the land ranges from some good grassland to heavy land to bogland. Even though a lot of the grassland was reseeded in the 90s, a lot of plant diversity has returned to the pasture and Gerry now has some good multi species pasture again. The farming system is very extensive and external inputs are minimal. The cattle are in for a very short period over winter where they are bedded on rushes cut from the land. Some haylage is cut every year to supplement winter feeding.

There is lots of space for biodiversity and wildlife on the farm, from bog and ponds to thick hedges, pockets of woodland and an orchard. Gerry is delighted to have a pair of nesting buzzards on the land. There are lots of frogs and newts on the farm, as well as badgers, foxes, rabbits and hares. Gerry and his family take a holistic approach to life and are passionate about protecting nature in any way possible – "Anything that I can do to encourage better care of our environment, on or off the farm, I'm happy to do it."

Nomination:
Gerry is part of a cohort of early adopter organic farmers that should be celebrated for their brave and pioneering nature. Dismayed by the loss of farmland species he has witnessed during his lifetime, Gerry took stock of the way he was farming and decided to make a positive change toward organic farming.

Gerry is a keen observer who is excellent at grazing management, all his decisions have a sensitivity to the natural environment around him.

He has a very neat farm, ponds and bog, great thick hedges, and very diverse swards and pockets of tree planting. It is a great place to visit, he is also well able to speak and would appeal to a broad audience of beef farmers.

He direct-sells some of his beef similar to mine, but he also sells into the organic commodity market so he has a good grasp on a spectrum of outlets for his animals.
Nominator: Clive Bright, FFN Ambassador 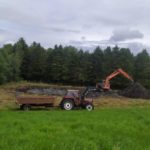