Gareth Culligans home farm consists of 30 acres, supplementary to this 100 acres is leased in and 400 acres are rented in, based at Stabannan, Castlebellingham, County Louth and farmed independently since 2001 after Gareth took over the running of the farm from his father Nicholas Culligan.
In 2001 Garerth ceased ploughing and implemented min till crop establishment which he practised until 2008 before progressing to directing drilling and finally to full No-Till crop establishment.
Throughout these years Gareth has based his crop establishment on the key principles of conservation agriculture (CA). The 3 fundamental principles of CA are “no till”, “cover crops” and “rotation”. Along with these principles he has incorporate the reduction of pesticides, herbicides and chemical fertiliser as well as not using any insecticides whatsoever. Biodiversity, insects and bees are an important part of any eco-system and Gareth embraces these fundamentals to build a sustainable future on his tillage farm
Companion cropping is a pivotal part of his farm and is defined as the planting of different crops in proximity for any different reasons. Companion cropping is beneficial in reducing the need for chemicals whilst promoting a creature friendly habitat and enhancing soil health. As John Geraghty Conservation Agricultural Consultant, quotes the “best tool a farmer has is a plant”. This practice is paramount to the creating a sustainable cropping system.
So far he has seen numerous benefits on the farm since implementing Conservation Agriculture. These include the reduction of machinery use, reduced dependence on chemicals, soil improvement incorporating the reduction of weeds and disease and creating a haven for birds, bees, insects and soil micro-organisms.
Last year the farm was visited by Mairead McGuinness MEP and the First Vice President of the European Parliament along with over 30 delegates from the agricultural committee to view my practises of CA. At the time a summer cover crop of sunflowers, phacelia, buckwheat, oats, peas, mustard and oil radish was in full bloom and was an important topic of discussion among the MEPs.
With the success of last year’s sunflower cover crop mix, his goal is to sow a similar mix with the aim of allowing the local football club and school children to harvest the crop, retail it and use the proceeds for the club.
I believe that the methods practised by Gareth are beneficial to the environment and can pave the way for the future of a sustainable tillage enterprise and climate change for generations to come. Building for a sustainable future in tillage is important as we face new challenges in the future.
Gareth is also a founding member of BASE IRELAND. BASE stands for Biology, Agriculture, Soil & Environment. Gareth has embraced the concepts and practices of Conservation Agriculture on his farm and is helping over 70 Base members implement CA on their farms. Its motto "farmers educating farmers" is core to this strategy through meetings, foreign trips, seminars and conferences.
1.Wheat+Companion Beans
2.Beans+Phacelia
3.Gareth+Sean
4.Sunflowers in bloom
5.Phacelia+Butterfly 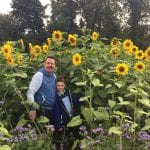