Fergal Byrne farms 65 hectares in Co. Kildare. The organic mixed farm includes suckler cattle, sheep, turkeys and tillage. Cereal production includes 15 acres of organic oats for Flahavans, as well as 10 acres of barley and pea combi-crop which is used as animal feed during the winter months. Fergal grows 8 acres of red clover which is also fed during the winter months as silage. The remaining land is permanent pasture, whereby the animals graze in a mixed, paddock grazing system from spring until autumn. Composted manure and compost teas are used to fertilize the land. Fergal relies on extremely few external inputs to run the farm. He runs a suckler herd of about 17 cows and a flock of 200 breeding ewes. All animals are pasture-finished on the farm and sold to the organic market. Turkeys are also reared on the farm and sold locally for the Christmas market.

On the farm there is 14 acres of broadleaf forestry. Many trees and hedges have been planted on the land over the years and hedgerows are managed for biodiversity. A section of the red clover is left go to flower every year, attracting vast amounts of pollinating insects – including the rare Muscorum bumblebee. There are yellowhammers, finches and many songbirds nesting on the land. There are streams and boggy areas on the farm which act as water habitats for many creatures, most notably frogs at the moment.

Fergal has built a farm that values diversity – this low-impact system is resilient from both an environmental and economic point of view. “To me, farming for nature refers to farmers who farm with their instinct, rather than being told how to farm...”

Nomination Description:
Fergal and his family farm 65 hectares in County Kildare. The farm is organic and includes tillage, suckler cows, sheep and turkeys for the Christmas market. All animals are finished on a home-grown ration, nothing is bought in only seeds. Fergal grows a combicrop including red clover to finish his cattle. Last summer, having noticed the huge number of bees and other insects on his red clover, he decided to leave a 14 foot strip of it until it had finished flowering before harvesting it. The turkeys are free range and fed on home grown organic oats. He aims at producing high nutritional value foods in a natural way. The numerous hedges are trimmed in rotation and some are left as tree lines. His farm offers a safe home to some of the rarer species of bumblebees (Muscorum), and birds like Yellow Hammers amongst others. Fergal is Chairperson of the organic branch of ICSA and is part of the Wool Steering Group. This group aims at finding new markets in Ireland for sheep wool instead of exporting it.
Nominator: Kim McCall, FFN Ambassador 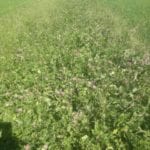