Dominic is inspirational in the enthusiasm and passion he has for preserving and cultivating historic varieties of wheat such as emmer, einkorn, and spelt. On his farm in Cornstown in north County Dublin he dedicates part of his land to growing these and other older varieties including ones that produce long straw which is required for thatching. Ireland's thatched buildings were created from materials that were readily available in the locality. The thatching material used depended on what was to hand easily be it wheat straw, rye straw, oat straw, reeds, rushes or other. In Fingal (north County Dublin) wheat straw thatch dominated. However, the wheat grown today tends to be higher yielding, short-stemmed varieties that are not suited for use in thatching and in addition modern methods of harvesting crush the straw making it unusable for thatching. It is important for the proper conservation and continued survival of the country's vernacular thatched buildings that the materials used in their construction can still be sourced within the country as locally as possibly and not have to be imported from abroad. However, this takes more than planting the correct variety but also entails planting at the correct time of year, using more traditional and labour intensive farming methods and/or machinery for harvesting. Dominic's dedication to reviving historic wheat varieties and to producing thatching straw using traditional methods has been integral to the protection of thatching traditions in the surrounding counties. Dominic's knowledge and collection of historic cereal varieties has also informed UCD School of Archaeology in its analysis of archaeobotanical remains from archaeological excavations to identify the food eaten and produced by our ancestors.

SECOND NOMINATION
I wish to nominate Dominic Gryson, who is a farmer in Cornstown, on the border of counties Dublin and Meath. Dominic has an extraordinary curiosity about nature and traditional practices, and it is this curiosity that has led him to recreate how farming was carried out in Ireland thousands of years ago. Dominic has a passion for the rediscovery of heritage cereals and shares this passion with all who meet him. Dominic is thereby making an important contribution to farming in nature by encouraging new perspectives in Ireland’s ancient practices.

Dominic’s farm is located in a gently undulating landscape where cereal production is the primary land use. The Gryson family – Dominic and Fionnuala, their four children, and Dominic’s parents nearby – has a range of animals on their farm, including goats, cattle, sheep and chickens. But Dominic’s real passion is for heritage crops. He is growing an extraordinary variety of heritage crops, exploring how they grow, potential harvesting methods, their yield and their uses. Dominic is passionate about sharing his knowledge and experiences, which is how I first met him.

I am a lecturer at UCD School of Archaeology. Dominic began to engage with me almost two years ago when I established the UCD Ancient Foods Research Group. He was keen to learn about the excellent scientific evidence we have for crops grown by Ireland’s prehistoric farmers. Most of my work is based in the laboratory, looking closely at ancient specimens of cereals unearthed during archaeological excavations. Dominic is testing our findings by growing these crops in a modern setting, helping my research team develop new understandings about ancient practices. Dominic is educating and enthusing young researchers, allowing them to get hands-on with the crops and soils, and really understand why people in the past may have chosen to grow certain crops.

On his farm in Cornstown, Dominic is growing the cereals of Ireland’s first farmers 6000 years ago – emmer wheat and naked barley – as well as a key cereal in Neolithic central Europe, einkorn wheat. Dominic also grows cereals favoured in later prehistoric Ireland, including spelt wheat and oat. These cereals require rather different management practices when compared to our modern crops, but Dominic relishes the challenge, and he loves to share his trials and successes with farmers, researchers and the wider community. My most recent visit to the farm was a few weeks ago at harvest time, when Dominic was also preparing for a visit by his local authority Heritage Officer, demonstrating his commitment to sharing his knowledge with a wide variety of stakeholders. Dominic’s approach is agriculturally and socially progressive, because people are increasingly interested in the foods eaten by our European ancestors – Dominic is showing that we can grow these foods again right here in Ireland. Dominic’s story is a positive story, showing how a curious farmer and his family can bring us back to the landscapes of our ancestors and help us really appreciate our long history of farming in Ireland. 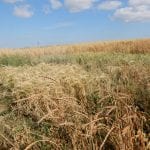 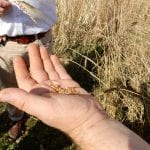