Dominic and Fionnuala Gryson of Cornstown House run their organic farm in Ashbourne county Dublin. It is a mixed farm comprised of various enterprises – they grow ancient grains such as emmer, einkorn and spelt. They also grow a range of vegetables on the farm. The farm is home to a variety of animals including sheep, cattle, goats, poultry, bees and most recently alpacas. The Grysons run farm tours where guests can walk the alpacas, learn about the farm and how it runs, and enjoy the woodland and surrounding nature.

Dominic and Fionnuala are passionate about protecting and enhancing nature on the farm. Eight acres of the land has been planted with native woodland. They have installed bird boxes around the farm which has attracted many birds, especially finches. There are also buzzards, kites, bats and frogs on the land. They have planted wild bird cover crops to provide a food supply for birds over the winter months. “Since we have incorporated the grey partridge strips on the farm, it has attracted loads of biodiversity. I take butterflies as an indicator species, because if anything goes wrong, they are the first to go.” Dominic has noted a significant increase of butterflies on the land, including small blues, cabbage whites, orange tips, peacocks, red admirals, painted ladies, tortoiseshells and cinnabar moths.

Green manures are used on the land to enhance the soil structure, compete with weeds and to build soil organic matter. On the farm they have used clover, phacelia, buckwheat and lupin green manures, which also attracts lots of insects to the farm. Dominic and Fionnuala are passionate about education and showing people how farms can work in harmony with nature.

Nomination Description:
Dominic & Fionnuala Gryson farm just outside Ashbourne in Co. Meath . This is an area of intensive cereals and vegetable growing. The farm was part converted to Organic Farming in 2020, with the remainder converting in 2021. They have participated in GLAS since 2017 .Dominic has a great interest in Nature and has put a nature corridor around the perimeter of the farm with a view to opening it up to the public . He chose the Grey Partridge and Arable Strips under GLAS as well as Wild Bird Cover He has also planted an orchard and some forestry on the farm Dominic is also growing old heritage varieties of cereals in order to mill his own flower and produce long straw for thatching. He plans to also install a large pizza oven and make pizzas from flour ground from the heritage varieties as part of the visitor experience. he also keeps Alpacas and Goats cattle and sheep and a variety of other fowl on the farm . I think his farm presents a unique opportunity for people to re-connect to nature in an area which is quickly becoming urbanised so close to Dublin www.cornstown.ie They have been members of the coop since 2019
Nominator: John Brennan, Manager, Leitrim Organic Farmers Coop 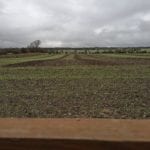