Dinny Galvin is a lifelong farmer from Lispole in County Kerry. He runs a conventional dairy herd, milking about 60 cows. He also keeps a flock of 150 West Kerry Mountain sheep - “The sheep to me are like friends, they each have their own character and identity”. The land is mixed, ranging from commonage to improved peatland to permanent pasture. The hardy sheep are outdoors for most of year, helping to manage the diverse pasture on the commonage. The stocking density is kept on the lower side to avoid stress on the land. Dinny is putting aside 1.5 acres of land as a pollinator friendly area this year where he will plant native wildflowers - “We need to act quickly if we are to protect our insect species in the country”. The hedgerows are regarded as important habitat on the land and there are areas of scrub around the farm that are left for wildlife. In an attempt to reduce the amount of artificial nitrogen spread on the land, Dinny has re-seeded some of the grassland with clover and multispecies leys.

Dinny is heavily involved in the local community. He is Chairperson of the West Kerry Dairy Farmers Sustainable Energy Community and chairperson of the West Kerry Mountain Sheep Breeders group. He is a Farming Ambassador for PLUTOS project in conjunction with Dingle Hub. And he is an Ambassador for the Dingle ESB project involving the implementation of new technologies to help develop a low carbon network. He has taken numerous actions to improve the energy efficiency of his milking parlour and is dedicating a lot of time to helping other dairy farmers to do the same thing.

Nomination:
Dinny loves farming & nature and has a keen interest in renewable energy incentives which benefit the environment and the farming community by helping the dairy industry reduce its carbon emissions. Dinny firmly believes that farmers are part of the solution and not part of the problem. Dinny is Chairperson of the West Kerry Dairy Farmers Sustainable Energy Community. This is a voluntary farming community group that completed an Energy Master Plan for dairy farmers in West Kerry. This was done with grant aid from SEAI, ESB, Kerry Agri and Dovea Genetics. He is also Chairperson of the West Kerry Mountain Sheep Breeders group. Their aim is to preserve the local mountain Scotch sheep. Dinny is a Farming Ambassador for PLUTOS project in conjunctioon with Dingle Hub. He is an Ambassador for the Dingle ESB project, a 3 year project involving the implementation of new technologies to help develop a low carbon network. Dinny has begun working on a locally led scheme for West Kerry Farmers that aims to address biodiversity issues. Dinny farms in Aglish, Lispole, Co. Kerry, with his wife Nicola, and has 5 school going children, a son and 4 daughters. He runs a dairy farm with 65 cows, replacements and over 100 sheep. The farm has some good permanent grassland alongside improved peatland with a main water source flowing through. He also works as an AI technician for Dovea Genetics serving the farmers of Lispole, Annascaul and Dingle. He is very generous with his time and expertise and is always welcoming when it comes to open days on his farm. He has a huge interest in reducing the carbon footprint associated with farming and had so long before it was the fashionable topic that it is nowadays. He deserves recognition for his achievements and would make an excellent Farming for Nature ambassador.
Nominator: Patrick O Shea, Agricultural Consultant 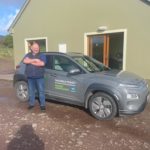