Diana Pickersgill farms near Mullingar County Westmeath where she manages a mixed organic farm with the help of her children. Diana bought the land in 1993 and immediately converted to organic. She planted 40 acres with a diverse multispecies sward. 5.8ha of land was planted with mixed broadleaf woodland and another 2.4ha of mixed broadleaf woodland was planted in 2018. The woodland is managed by a continuous cover system and Diana’s son looks after this aspect of the farm. An advocate for the importance of maintaining diversity on farms, Diana keeps a variety of stock on the land but maintains low stocking numbers. She buys in Dexter cattle and finishes them on the farm. She keeps a flock of about 31 breeding ewes, selling organic lamb to Irish Country Meats and direct to local customers. Two sows are kept on the land, along with donkeys and chickens. Silage or hay is cut every year. External inputs on the farm consist of small amounts of organic concentrates for some of the animals during the winter. Some oats are grown on the farm every year to help supplement winter feeding and to provide straw for winter bedding. The farm is quite self-sufficient, and the family grow vegetables for the house as well.

Diana takes pride in running a productive farm, all the while protecting and enhancing biodiversity on the land. Habitats include woodlands, hedgerows, wetland areas with 2 ponds, and orchard, meadows and wildflower areas. Subsequently there is plenty of wildlife on the farm including long eared owls, buzzards, pheasants, snipe, woodcock, hawks, red squirrel and lots of insects - "Last year we counted 35 different bird species before March."

Nomination:
Diana bought Rathcam farm in Westmeath in 1993. It was 89 acres of conventionally managed land of which 40 were leased to a tillage farmer. The land was reclaimed and immediately put into organic conversion. The land was then seeded the with a high clover grass mix and bought a flock of sheep. In 1998 Diana joined REPS 4 which enabled her to plant five hectares of mixed broadleaf forestry and some conifers on wet boggy land. Diana went on to do an agribusiness course where she learnt about rotational grazing and bought a herd of Aberdeen Angus cattle, rotating the grazing of the cattle and sheep to improve fertility and parasite management. She maintains a closed circuit farm, making hay and straw and using pigs and animal waste to fertilise the land. In 2008 the farm went into REPS 5 and planted a native Irish orchard with trees from the Irish Seed Savers. She fenced off two wetland areas, creating ponds that are a haven for wildlife and attract many wildfowl. She put up multiple bat and owl boxes on the land. Diana took over the sole management of the farm and did an organic course on her own stead and rejoined the Organic Trust. With the assistance of her children Diana maintains to this day a beautiful, diverse farm where most of the families and animal’s needs are provided for. In recent years she has planted further areas of native Irish woodland to support the farms biodiversity and ecosystems. Her daughter Nadia restored the Victorian style walled garden using it as a small market garden. Nadia also bought a herd of Tamworth pigs, created a wildflower meadow and planted many organic flowers and plants , further attracting pollinators to the area. The family are very proud of Diana and the beautiful farm she has created, her work is apparent by the healthy population of red squirrels, owls, pheasant, snipe, woodcock, hawks, buzzards and butterflies and bees, and 4 species of resident bats. Diana's goals for 2022 are to plant a further two acres of native woodland and to get bees.
Nominator: Kate Egan, FFN Ambassador 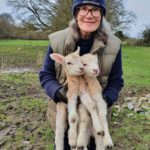