David Kerr is a commercial dairy farmer from Ballyfin Co Laois. The 70-ha farm is comprised of mixed land ranging from good grassland to wet heavy land to cutaway bog. David milks 150 cross-bred cows, “following the old farming mantra of one cow to the acre”. He also keeps a small flock of Dorset Horn sheep on the farm. 20% of the land has been reseeded with multispecies swards and clover and this has helped reduce the amount of artificial nitrogen spread on the land. David is an advocate of efficient grassland management, and he hosted a very successful Irish Grassland Association summer tour on his farm in 2014.

There is 3 acres of woodland on the farm, mainly oak, which was planted by Davids late father George. To honour the passing of George last year, David devoted an area of land to a wildlife pond. The 1.5-acre pond was dug and different tree species were planted around the pond. Although the pond is not yet one year old, it has already attracted numerous bird and insect species to the land and has become a central part of the farm. David has left approximately 12% of his farm as non-commercially productive land and he values this land for its biodiversity and wildlife value. “If you farm in a technically efficient manner, you can afford to leave some land aside and dedicated for nature.”

David is a strong example of a farmer who runs a commercial and productive farming enterprise, all the while leaving space aside for nature, biodiversity and wildlife on his land.

Nomination:
David Kerr farms 64 hectares in the townland of Ross in the Parish of Ballyfin at the foothills of the Sliabh Bloom mountains. He milks 160 cows and has a small flock of the rare breed Dorset horn sheep. He is a widely known and respected dairy farmer who has long been a strong advocate of grass based, low input and labour efficient systems and he has received much recognition for his herds genetics and his grassland management skills and he hosted a really successful Irish grassland Association summer tour in 2014. David farms next door to me and I have been privileged to know him many years. He is someone I personally look up to and respect his many insights into the complexities of farming. He is an independant thinker and has always been a powerful advocate for farmers. He is also someone I know has deep appreciation of the sustainability of our farms and the many facets that feed into to meeting that challenge. David has inherited many of these qualities from his father George, who sadly passed away in early 2021. In the spring of 2021 David devoted an area of the farm to a wildlife pond, enlisting the help of friends and neighbours to develop a fitting and lasting tribute to George. The pond has already attracted much wildlife such as the beautiful kingfisher bird which David caught on a trail camera and will undoubtedly continue to grow and develop into a beautiful sanctuary for nature. This pond was featured on Ear to the Ground in January of 2022. I think David is an excellent example of a commercial and efficient farmer who is actively engaging with the problems that have come about from farming at the expense of nature, he is someone willing to stand up and meet a challenge when needed and inspire others to a cause, he is a lateral thinker who has a lot to offer in any conversation involving farming for nature and would undoubtedly make an excellent ambassador for the farming for nature initiative.
Nominator: John McHugh, FFN Ambassador 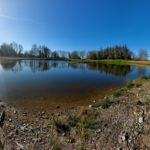 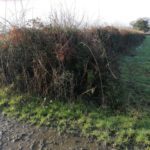