Colm Flynn is a 4th generation lifelong farmer from Athy county Kildare. The land has been intensively farmed for cereal production for many years. About 7 ago, having experienced and understood the impacts of intensive tillage on the soil health, Colm decided it was time to reevaluate his farming practices. He is actively involved in the Danú farming project and has spent the past number of years working to rehabilitate soil using biological solutions – “learning how to rehabilitate a commercial farm in a commercial context and find alternatives to chemical applications.” Part of his involvement in the project included reintroducing grasses and multispecies swards to the farm - allowing the land to rest, building organic matter and regenerating the soil biology. The farm is currently 50% cereal production, producing spring peas, winter barley, oats and wheat. The remaining 50% is under grassland and used for silage production and cattle grazing.

Colm has always been interested in nature and wildlife. Areas of mature woodland on the farm serve as habitats for hares, foxes and badgers. He has planted an orchard on the farm, most of which is left as food for birds and insects. There are numerous species of birds on the land including finches, mistle thrush, jackdaws, long-eared owls and barn owls. Colm continues to work hard to create a farm that is productive, economically viable and ecologically biodiverse - “I recorded 33 species of birds come through the farm this winter. I did an audit of the plants that grow on the farm and 84 plant species were recorded – from the tiniest little flowering plant to rushes to wild orchids. I hope in a few years time that the number of plant species on the farm will have increased.”

Nomination Description:
A lifetime farmer, Colm openly admits to have come from a time of when you lived off the land, snared rabbits, eat pheasant and pigeon. From his poacher days, he has a deep awareness of all things wild, and now turned keeper, brings a wealth of knowledge to any debate on the future of farming in Ireland.
His sense of community, is reflected in his involvement in the creation of Action South Kildare, and the Leader Company, KELT.
His passion extends to his involvement in Narraghmore Vintage Club and south Kildare’s History and Heritage Group.
His farm is a legacy of the reclamation era of 1970/80’s EEC food production model. He is now gravely concerned about the damage done by his involvement in this policy. To this end he is an active member of Danú, several local forums like, bee friendly farming, the pollinators program, and wild Kildare. He is not afraid to challenge NGO’s like Birdwatch Ireland to be more proactive in engaging with mainstream farmers and facilities interaction where possible.
His catch phrase, “I knew my land was in trouble when the crows stopped following the plough “ speaks volumes.
He is actively rehabilitation his farm, by auditing its biodiversity, reacting following sound science and re planting.
He has planted multi species swards into land which has being continually plough for over a 100 years. The aim of this is to bring life back into his land both above and below ground.
He has used every chemical under the sun but is now actively looking at ways to reduce his chemical inputs and has not confined this search to the Danú trial plots. He has numerous trials throughout his farm all with the aim of reducing chemical inputs and increasing biodiversity both above and below ground.
Nominator: Dave Beecher, Field Officer, Danu Farming Group 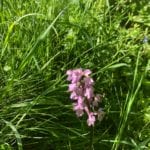