FARMING FOR NATURE AMBASSADOR 2019
Clive raises 100% grass-fed organic beef on his 130-acre farm in Ballymote, Co.Sligo. He has built his ‘Rare Ruminare’ brand based on his mix of traditional breeds such as Hereford, Shorthorn and Angus which are well suited to maintaining the farm’s species-rich grasslands. He sells his beef directly to the consumer. He uses mob grazing to ensure that grasslands are given time to recover between grazing periods and to improve the diversity of his grasslands through a more even grazing pressure and suitable stocking rate. He is a good example of how working with the right stocking rates and the environnment at hand you have you don’t have to supplement the diet of the animals or put them inside but just work with nature. “With this method of [mob] grazing you have put on enough condition on the cattle with a 100% grass fed diet.”

NOMINATION:
Clive is an organic farmer in Co. Sligo. His business model is 100% grass-fed organic beef from livestock that are free to graze in species-rich swards. His brand is called Rare Ruminare and on the farm, Clive has a mixture traditional breeds such as Hereford, Shorthorn and Angus. These breeds are selected for temperment and because they can make the best use of the farm's species-rich grasslands. Clive and his family take a holistic approach to farming, where livestock production, welfare and ecosystems are all of equal importance. Rare ruminare website - www.rareruminare.com
Nomination 1: Dolores Byrne, Ecologist, Sligo IT

Organic farmer, Clive Bright of Rare Ruminare , rears 100% pasture-fed beef and lamb on his 120-acre farm in south Sligo. Upon taking over his family farm in 2003, Clive had two goals in mind, firstly to find a way for his farm to make a profit and secondly to do it without compromising the environment. He tells of his first mentor, a German farmer Erwin Springbrunn who gave him the initial confidence to convert the farm to organic production. In later years Clive discovered the ideas of Permaculture and Holistic Management and his whole farming philosophy started to fall into place. Clive sees his farm as an ecosystem in which, the livestock are just one part. He sees his role as managing the animals, so they maintain a balance within their niche. "where nature thrives is a good place for a cow to live – it's that simple" he says. The ultimate goal is to design his farming model so he can virtually farm for free. "If you are truly farming in nature’s image, it shouldn't cost anything: the sun and soil grow grass, cows eat grass". Measures to enhance the farm ecosystem or increase ecosystem function are Clive's primary long term focus. He says building the farm resilience is the best investment and the fastest way to farm in the black. He believes establishing well-designed silvopastures, or woodland pastures are the future for his marginal land. "Rushes are the bane of farmers all over the North West, but they are just a symptom of a non-functioning water cycle in compacted clay soils. Rushes don't often grow within 10 metres of an established native tree, because the tree roots bore through compaction, and pump water from the soil all while building soil carbon, sheltering the animals and the pasture all while creating diverse habitat for hundreds of other species" Inter-pasture trees together with mob-grazing his cattle seems to be the ideal farming model for his land as it is both productive and a huge benefit to the environment. Mob grazing is a planned grazing framework wherein the animals are moved daily to new pasture and only graze grass that has fully recovered (at the 3-4 leaf stage). This dramatically increases the natural plant species diversity in the fields, as the sward is grazed relatively evenly, the whole sward gets to recover and compete equally. This model also ensures that because the animals are only allowed to eat "recovered" grass that Clive is always farming within the natural potential of the land. If the herd is too big and the rotation is too short the grass will not be recovered, become over-grazed, and the model will fail.  Clive is adamant that his animals are adapted to the land, to mob-grazing and grass finishing. If animals are not naturally thriving, they are culled. This means the herd is healthy and easy to manage.  The final part of Clive's enterprise is that he direct sells his pasture-fed beef.
Nomination 2: Sinead Moran, Founder, FOODTURE 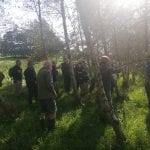